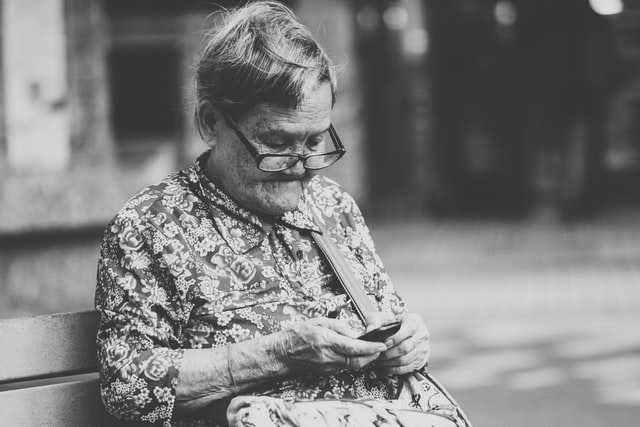 By Mireia Fernández-Ardèvol and Andrea Rosales, researchers of the IN3’s CNSC group.

The digital divide especially affects older people, often creating the impression that they have no life online at all. But you only need to go outside or travel on public transport to see that this perception is nothing more than a stereotype. Digital practices in later life are rich and diverse, as borne out by a growing number of studies.

We have analysed the use of smartphones in four countries (Canada, Spain, the Netherlands and Sweden). The data we refer to here pertain to participants aged between 60 and 79 and reflect four weeks of their smartphone activity. In total the study contemplates more than 800,000 records corresponding to over 300 users.

The data allow us to answer questions such as: What are the most popular mobile phone activities? How is phone use distributed over the course of the day?

Interpersonal communication and social life are key elements of participants’ mobile phone activity. The two largest categories are Calls & messaging, which accounts for half of the accesses and includes voice calls and applications like WhatsApp and Telegram; and Social networks, such as Facebook and Twitter.

It is interesting to note that the category Image, audio & video is the third largest. It includes creating, sharing and consuming photographs and video and audio content. Thanks to other studies we know that, in the specific case of Spain, photos are even more popular than conventional voice calls among internet users over the age of 60. The less popular categories include Games & gambling (4th), which includes Candy Crush (game) and Billionaire (gambling); Shopping (6th), including apps like Amazon; and Health & fitness (7th), with apps like Fitbit.

Another way of measuring usage is by analysing the distribution of accesses over the course of the day (Chart 2). It is immediately evident that usage is higher during the day than at night. Mobile use mirrors the social uses of time, increasing from 7 or 8 a.m. and tapering off from 8 p.m. Interestingly, the activity of both the younger cohort (60-69) and the older cohort (70-79) is practically the same throughout the day. The curves are similar and neither group is permanently above or below the other.

Chart 2. Smartphone use over the course of the day 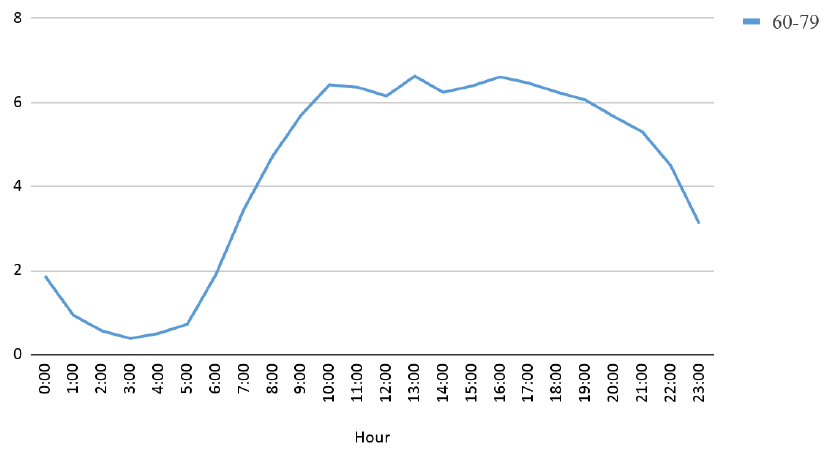 Although the general usage patterns over the day are similar for the whole group, there are age-related differences in the applications used (Chart 3). Among the younger cohort (60-69) the most popular application is WhatsApp, followed by Facebook. Gmail is in fourth position.

In the older cohort (70-79), while WhatsApp remains on top, the second most popular app is Gmail and the third is Facebook. Finally, Instagram and the phone’s camera also seem to be associated with age, given that the 12 applications most used by the younger group (60-69) include Instagram, but not the camera. And the opposite is true of the older group (70-79).

Chart 3. The 12 most popular apps, by age group 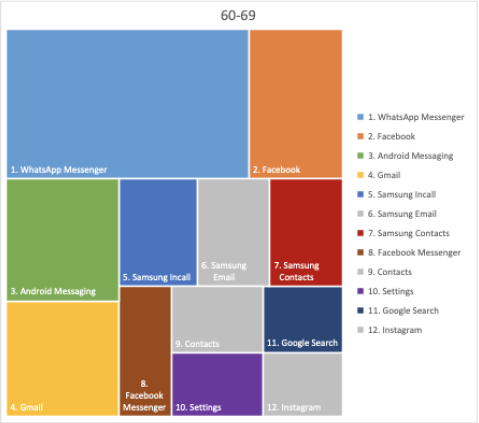 Our findings allow questioning certain myths that, whether or not they were true in the past, are in any case now diminishing.

If this is true, then why are phones mainly used to socialize and take photos, while the Health & fitness category is in 7th position, out of a total of 12? (See Chart 1).

Myth 2: Older people do not use digital environments for play

If this is true, then why is Games & gambling the fourth most used category of mobile apps, above News & media (5th) and Weather (11th)? (Chart 1).

If this is true, then why is mobile usage distributed throughout the day and the night and why does it show a variety of uses? (Chart 2; Charts 1 and 3).

If this is true, why are participants using their mobiles every day, at different times of day and for different activities? (Charts 1, 2 and 3).

Myth 6: The term “older people” describes a homogeneous population group and, therefore, it is not necessary to analyse the various age groups that make it up

If this is true, then why does the use of mobile apps change with age? (Chart 3). The diversity of uses we found justifies detailed analyses to understand the different digital interests and needs throughout old age.

Myth 7: There is nothing to be learned about older people’s digital practices due to the digital divide. When older people have internet access their use is similar to that of the rest of the adult population

The data show that older people have their own characteristics, which vary with age. Therefore, it is a mistake to extrapolate the results of younger age segments to “guess” the digital practices in old age, because in each stage of life people have different (digital) interests and needs.

Mireia Fernández-Ardèvol and Andrea Rosales are members of the IN3’s Communication Networks & Social Change (CNSC) research group that aims to analyse selected, relevant social challenges of the network society such as technopolitics, ageing and digital technologies or development and digital divides.