Manuel Castells: “I’ll redo a lot of things, I haven’t finished yet” 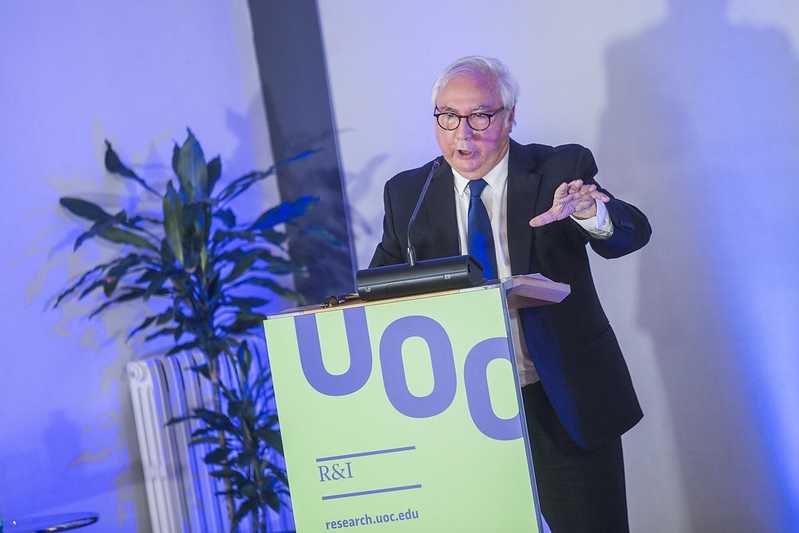 Translated into over 20 languages, The Information Age is an international standard for understanding how society has changed as a result of the digital revolution and the globalization of the economy. This trilogy of books is by Manuel Castells, professor of Sociology at the UOC and former director of the Internet Interdisciplinary Institute (IN3).

On 3 June, Castells and his trilogy were the focal point of the ceremony marking the 20th anniversary of the IN3, which should have taken place in 2020 but was replaced by a month-long asynchronous workshop as a result of the pandemic.

The workshop and hybrid round table event held this year had the same two aims: first, to commemorate the IN3’s 20th anniversary by revisiting The Information Age, which appeared a quarter of a century ago; and second, to examine the current validity of the findings of Professor Castells’s three-volume investigation, published in 1996, 1997 and 1998, respectively.

As well as the author, the round table was attended by six international experts who, from their own specialist areas, tried to answer this question. The session was chaired by Marina Garcés, a faculty member and researcher at the UOC, with the participation of David Megías, the current director of the IN3, and Josep A. Planell, the president of the University.

At the end of the event Professor Castells thanked the participants for their contribution and announced: “I’ll redo a lot of things, I haven’t finished yet. “In the words of the UOC professor of Sociology “a theory is only a good theory when it becomes useful for understanding reality (…). And, for many of us, for changing it.”

In his contribution to the round table, The Network Society in the Age of Pandemics, Castells made a number of comments referring to the validity or otherwise of concepts presented in The Information Age. They are covered below.

The spectacular growth of the network society

The first volume of Castells’s trilogy focuses on the concept of the network society, which he sees as the social structure of our age, “the information age”, in which society is constructed around personal and corporate networks based on digital networks that communicate via the internet.

The former director of the IN3 pointed out that what he had observed over two decades ago had expanded spectacularly. “Internet-based social networks have become the platform for everything,” he said.

In the context of this process, artificial intelligence has ceased to be science fiction and has become basic for processing the millions of data items we generate, and 5G is now being rolled out. He said that a massive urbanization of the planet is occurring, with the emergence of “megametropolitan areas”, and social movements and politics are also undergoing a transformation. One of the consequences of this is the emergence of what Castells had identified as the global criminal network economy.

At the same time, as suggested in his theory, which contrasted networks with the need for individual affirmation, there has been a surge in identities based on religion, gender, ethnicity, and territory.

Castells did not hesitate to engage in some self-criticism, explaining that he felt it was necessary to correct his “initial romantic enthusiasm for social networks,” which, he believes, currently express three great human contradictions.

Firstly, he said, capitalism’s great capacity for expansion has penetrated the logic of social networks, to the extent that we now have data capitalism based on the uncontrolled, free use of networks, generating millions and millions of data items. “If we use networks, we are systematically refusing to defend our privacy,” he argued.

Castells also explained that, while social networks are a privileged platform for movements to bring about social change, they can also be used for racism, sexism, Nazism, homophobia and fake news, which seek to destroy the idea of truth, science and reason.

And another contradiction: The state, a traditional mechanism for restricting freedom, has found, in the massive use of social networks, which apparently foster freedom, a fantastic means of exerting control.

He said that although his analyses ruled out the dissolution of the state as a consequence of globalization, they highlighted the development of states in networks, such as the EU. This is an ongoing process: “States forming networks are not the same as state networks, whose power has shown extraordinary growth,” he pointed out.

According to Castells, the power of the state has grown not only through its ability to enter our minds via social networks or to manipulate elections, but also through the use of artificial intelligence, which, among other developments, has led to the even greater dehumanization of war, through the use of drones, for instance.

Overall, he added, we are experiencing a crisis of legitimacy, in which the public trust the state and politics less and less and the state, for its part, uses the judicial system as a last resort to override the power of the political system. The worst thing of all, he said, is that we suddenly find undemocratic states, supposedly bureaucratic and incapable of functioning, like China, for example, are the most efficient, albeit not the friendliest.

Incapable of inhabiting the planet?

Lastly, Castells referred to pandemics and climate change. The former director of the IN3 emphasized that the current pandemic has highlighted the development of global destruction networks: “The type of inhuman development we have witnessed over the last ten years, in these megapolitan areas, with the destruction of public services in favour of massive privatization, has led to a series of recurring health crises.” How are viruses transmitted? Through interpersonal contact networks, he explained.

If we add climate change to this, and new crises that may emerge, such as the collapse of financial markets, or sudden massive migrations, given that “everything forms networks,” then the situation does not inspire much optimism, Castells warned.

In the opinion of the UOC professor of Sociology, we can only avoid new catastrophes if we change our social organization, and the state’s ability to regulate this is crucial. How? It is not simple. That is why “more than ever we need theory to understand. Theory based on the emerging contradictions of the network society,” he concluded.