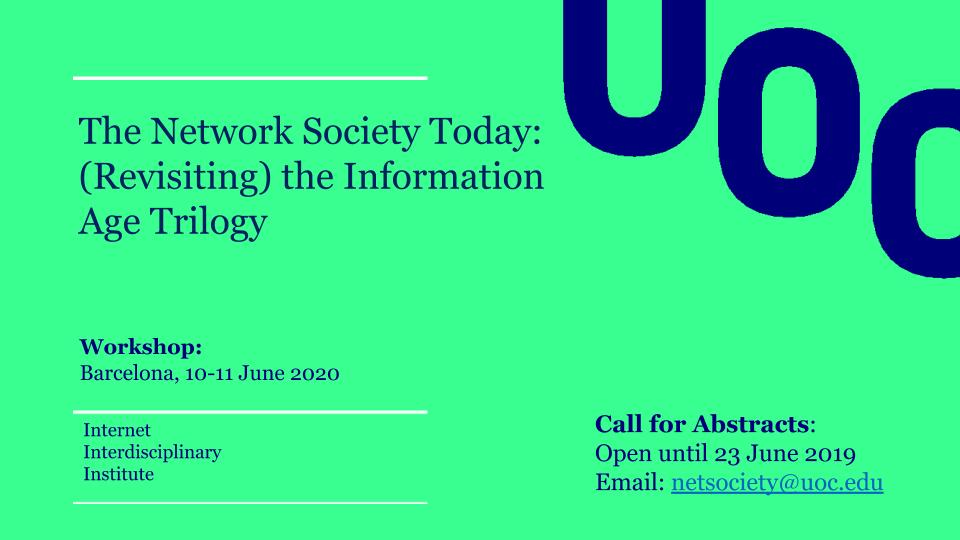 Manuel Castells The Information Age Trilogy has been one of the most influential works to understand the societal change in the awake of the digital revolution of the last decades.  It is, as Frank Webster (2002: 97) points out, one of “the most illuminating, imaginative and intellectually rigorous account of the major features and dynamics of the world today”. The theory of the network society developed in these books “open[ed] up new perspectives on a word reconstituting itself around a series of networks strung around the globe on the basis of advanced communication technologies” (Stalder, 2006: 1). Indeed, the work of Manuel Castells has influenced a generation of scholars, shaped a research agenda and has got important repercussions beyond academia (Bell, 2007).

Yet, more than two decades after the launch of his theory, the network society and the information age have been developing at a faster pace that anyone suspected in terms of: socio-technological and economic transformation (e.g. platform capitalism, sharing economy, robotization, algorithmic driven society, artificial intelligence and IoT, etc.), power geometries, new identities and socio-political contestation (e.g. populism, indignados, gilet jaunes, alt-right, technopolitics, buen vivir, #meetoo, LGBTIQ, black-lives-matters, youth for climate change, etc.) and new geopolitics and geographies of inequality and power (the rise of China as global power, multipolarity, the emergence of the Global South, the uneven impact of environmental crises, etc.).

At the same time, during the last decades a number of theoretical and epistemological trends have developed or consolidated in the social sciences that can be read as either influenced by or challenging the Trilogy position. Among others, the rise of network theories, mobilities paradigm, communication and power theory, technopolitics, post-colonialism or the relation between digital societies and nature.

In this regard, as 2021 will mark the 25th anniversary of the publication of the first volume of Manuel Castells’, it is time to revisit the trilogy and explore the relevance of Castells’ pioneering work in the light of the current state of the network society and of the ways to research about it. Thus, our aim is to gather together scholars from a wide range of disciplines – Including Castells himself – to engage with the Trilogy and debate on its contributions, legacies but as well shortcomings and new developments not envisioned at the time of its launch to try to develop a critical perspective on future trajectories of the network society and the information age.

We welcome contributions that sympathetically and/or critically engage with the Trilogy in any theoretical, methodological or empirical topic around the contemporary developments of the network society. Examples of areas and themes that we would like to discuss (but are not limited to) are:

The workshop is free of charge. Food will be provided at the conference for presenters. Accommodation and transportation are not included.

The workshop presentations should be the basis for a special issue in an international peer-review journal by 2021 to discuss the work of Manuel Castells in the 25th anniversary of the launch of the first volume.

This workshop is organized by the IN3 – Internet Interdisciplinary Institute, Open University of Catalonia. The workshop constitutes a central part of the IN3’s 20th anniversary.