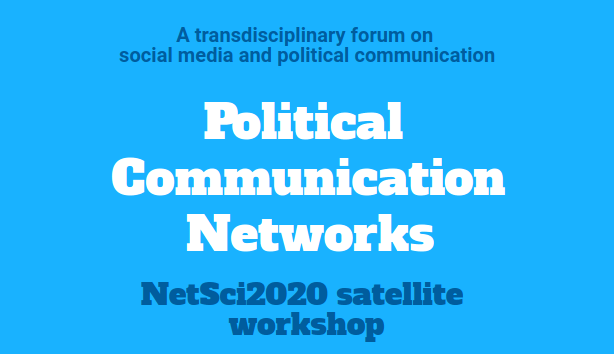 Traditionally, news media served as an interface between citizens and politics, eventually influencing political behaviour. In the information age, both politics and communication are transformed. The popularity of online social platforms has increased the number of actors able to spread political, commercial and other messages to a massive number of potential recipients.

On September 18th , we organized the Political Communication Networks (PCNet) satellite workshop in order to provide a forum where qualitative and quantitative methods in political communication studies could interact and mutually cross-fertilize. Network science served as a common ground, both theoretically and methodologically, for a transdisciplinary dialogue between these complementary traditions, while online social media and the interactions taking place on them became the transversal object of study and experimental setting.

The event featured three keynote speakers spanning a range of different topics, as well as eight contributed talks by authors from different research fields and countries.

Joana Gonçalves de Sa opened the session by sharing his theoretical and data-based thoughts on why people share fake news, the big elephant in the room in political communication nowadays.

Gonçalves suggested that we can use complex networks and social big data to understand cognitive biases and human behaviour. For instance, previous studies based on social media users’ activity have shown that lies, especially the most disgusting and shocking ones, spread faster than real news. Generally speaking, in the post-truth era, “our brains have no proper warning mechanism at work” when interacting online.

The first, most intuitive response to this issue has always been to try to promote the spread of reliable information. Nonetheless, we now know that this is not enough. On the contrary, it may be counterproductive in some cases: let us take scientific literacy as an example, which has been proven not to correlate with trust in science. The speaker argued that one of the main reasons why increasing the reach of verified information alone does not work is that we are not very good at assessing our own competences. Humans are far from being perfectly rational, which implies that there is no linear correlation between how much we know and how much we think we know. As a result, confidence grows faster than knowledge, thus generating an “overconfidence gap”.

In order to tackle the problem of fake news, Gonçalves considers that we need to understand the human side of the issue, turning to cognitive psychology theory to interpret data users’ behaviour on social media. Such data can then be used to validate hypotheses, such as the higher likelihood of overconfident people sharing fake news.

Gonçalves’ team performed experiments that showed how people with intermediate levels of knowledge tend to answer wrongly more frequently than people with very low ones, who tend to admit more easily that they “don’t know”. Additionally, overconfidence is not homogeneously distributed among different groups (e.g., it is more prevalent in men than in women, and in European Nordic countries than in southern ones). The next step would be to study whether the overconfidence profiles correlate with those that share fake news more frequently. In this regard, the role of social networks may be twofold. On the one hand, they amplify the problem. On the other, they offer a way to study it, allowing us to set specific “in vivo” social experiments to collect all the necessary data. However, many ethical problems arise and need to be addressed before such experiments can be performed.

Walter Quattrociocchi began by voicing his criticism of the computational social sciences’ programme of answering fundamental sociological and communication questions using social media data. He considers it too ambitious as it is hard to assess the limitations of the data and produce reproducible results.

Quattrociocchi hence proposed formulating new research questions that can be tackled using the data we have and applying the scientific method to validate hypotheses. Afterwards, he set off on a data-based journey that led us from confirmation biases, which he tied to the homophily that characterizes our information consumption, to echo-chambers, this sort of social bubbles we somehow all live in, here understood as communities of interest. In his concluding remarks, the speaker argued that misinformation processes are not a proper scientific topic since they represent an extremely small, ill-defined portion of online content consumption, which mostly deals with entertainment. The real problem is that “we are not looking for the information we need; we look for the information we like, and this creates the distortion”.

After the talk, the enlightening debate centred around the issue of whether or not this is a new phenomenology originated by our hyperconnected society. The discussion assessed whether social media are a mere tool for studying certain processes or if they also play an active role through recommendation algorithms which reinforce homophily. A more optimistic view proposed by PCNet20 co-organizer and session chair, Frederic Guerrero-Solé, suggested that online social media may also represent a tool for breaking through echo-chambers by building bridges between different communities of interest. Quattrociocchi voiced his scepticism about this possibility, stressing that nowadays, most mainstream social platforms are echo-chambers in and of themselves, since their users lean towards similar political options and share similar opinions.

The last keynote speaker, Paolo Gerbaudo, used the communication style of the very high-profile Italian politician Matteo Salvini to explore the relationship between right-wing populists’ engagement of different audiences and the emotional nature of social media content, focusing in particular on angry reactions and the virality of negative content.

Hence, the speaker argued for a more reliable methodology: to address the main research question, which does not require sentiment analysis, it may be better to consider the correlation between reaction types and number of shares, as a proxy of engagement. This shows that posts that arouse negative emotions obtain the highest levels of engagement.

Contributed talks enriched the debate by addressing a broad variety of specific contexts and case-studies, as well as proposing innovative methodological approaches.

Sima Hashemi highlighted some crucial differences between fake and true news, and how they diffuse on online social media. It is not just that fake news are retweeted more, they are also more likely to be retweeted from users other than the creator. People usually take true news items from the source, and these spread much further. This is likely because when people eventually find out that a certain news item is fake, the spreading stops.

Amirhossein Farzam and his co-authors sought to understand whether or not online social networks are public spheres that facilitate democratic deliberation. In particular, they focused on Farsi Twitter, which they described as lacking transparency and dominated by state media and surveillance, but also very dynamic. The researchers observed that, in political discussions, the fraction of bots involved (according to the Botometer assessment) is larger than in average conversations. Such bots usually tend to concentrate in a single major community (cluster of users) characterized by a high density of users spreading non-hegemonic contents. They concluded that there was evidence of opinion manipulation and a probable reinforcement of current hegemonies.

Ted Hsuan Yun Chen and his co-authors adopted a different perspective, focusing on polarization in the framework of a specific topic: the climate change politics debate in Finland. They suggested that it is relevant to detect if a society is experiencing an alignment of political preferences because such a process paves the way for hyperpolarization. No one who has differences with someone else is able to find any common ground about anything; there are just diametrically opposed groups of people who share no opinion. They used retweet networks to measure public alignment of eleven topics, including climate politics. Their results indicate that people’s opinions about climate politics are highly aligned with their position on new populists’ (Finns Party) and universalists’ (green, left) views. The issue of immigration stands out because of its polarization in this regard. Despite these worrying findings, the authors observed that alignment-based polarization is still limited to specific political domains.

Polarization was also the object of the study carried out by Samin Aref and Zachary Neal, who analysed the evolution of support for legislative bills introduced in the United States Congress. They looked at the political affiliations of the members of Congress in order to ascertain whether party polarization might help to explain the decline in the rate of bill approval over the past four decades.

Finally, the talk delivered by Bernat Esquirol provided the workshop with a bit of pandemic context. The speaker and his co-authors attempted to characterize changes in the tweeting behaviour of different types of Spain-located users during the first COVID-19 outbreak. By using different machine learning techniques, they found that normal users switched to a higher activity frequency some days before the lockdown, while politicians’ behaviour was not affected by the crisis.

The videos of all the invited and contributed presentations are now available on the dedicated YouTube channel. Enjoy!

Emanuele Cozzo is a researcher of the Tecnopolítica Unit from the Communication Networks & Social Change Research Group (CNSC) at the UOC’s Internet Interdisciplinary Institute (IN3) and member of the PCNet Organizing Committee.

Luce Prignano is researcher at the Universitat de Barcelona Institute of Complex Systems (UBICS) and member of the PCNet Organizing Committee.